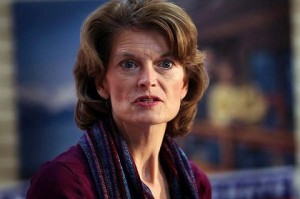 Alaska’s Sen. Lisa Murkowski is livid over President Obama’s move to ban oil development of the Arctic National Wildlife Refuge (ANWR). To her, it betrays the promise America made to Alaska in statehood.

Last week, she did it in a written statement that all but called the Obama administration economic occupiers of Alaska. On Monday, she wanted to make sure she was heard. In a fist-pounding press conference, she said that President Obama has declared “war” on her state. “The fight is on and we are not backing down,” she said.

Such strident rhetoric is not all that unusual in the Capitol. But rarely is it accompanied by such evident passion.

Recommended: Fracking. Tight oil. Do you know your energy vocabulary?

Mr. Obama’s proposal to declare millions of acres of the vast Arctic National Wildlife Refuge (ANWR) as wilderness – giving them the highest possible federal protection from drillers – is nothing less than a violation of the state’s “sovereignty,” Senator Murkowski said. And she vows to use every tool available – legislation, the budget, and the courts – to undo it.

To understand the depth of her anger is to understand Alaska’s unique place in the union. Other states, especially in the West, get their hackles up when the federal government interferes with land within their borders. But federal efforts to control Alaska land are particularly galling for many residents, given the unusual terms of Alaska’s statehood – and the past two days have served as a reminder of that perceived unfairness.

“We’re just a little more sensitive to it,” Murkowski told the Monitor in a brief interview.

Murkowski was only 2 years old when Alaska became a state, and statehood was supposed to fix many of the injustices that Alaskans felt as a territory. “For us, this is not ancient history. We’re very sensitive to the fact that as a territory, we just didn’t ever feel like we had any control,” she says.

Statehood in 1959 gave Alaskans more control, including unique terms related to land use. Because of fears that Alaska didn’t have a big enough population to provide a viable tax base, a so-called “90-10” provision allows Alaskans 90 percent of all revenues from resources developed from federal lands in the state. That’s more than double the percentage of other Western states.

“Now we’re getting screwed because we can’t access that land,” she said. “It’s infuriating.”

The Alaska congressional delegation – both senators and its one congressman – as well as the governor and other state officials, are united with Murkowski. That is no surprise, says Alaska historian Terrence Cole, a professor at the University of Alaska in Fairbanks.

“For elected leaders, opposing this is like opposing the midnight sun. It’s just not done,” he says.

It’s an issue of jobs and revenues in an isolated and dependent state with an economy as narrow as the Bering Strait. About a third of the economy depends on federal spending (the highest per capita spending in the country); a third is based on oil; a third is other activity, according to a study by the Institute of Social and Economic Research at the University of Alaska. Some 90 percent of the money in the state general fund comes from oil.

But times are getting harder. Declining production means the Trans-Alaska pipeline is only carrying half as much oil as it used to. And the price of oil has plummeted. Right now, the state is drawing down more than $10 million from savings each day to compensate, according to the governor.

Plain and simple, Alaskans are worried about losing their jobs, says Stephen Haycox, professor emeritus of history at the University of Alaska in Anchorage. That’s why the overwhelming majority of them support drilling in a coastal section of ANWR.

Seventy percent of Alaskans live in urban areas, he points out. “People do not come up to Alaska to live on the land and get their souls together,” he says. “They work in town, and they would not be here unless they had a job that would allow them to buy the material norm of American culture.”

Add all of these economic factors together, he says, and “Alaskans are rabid for any economic development of any kind. And anything that the federal government might do that threatens to inhibit economic development, like classifying ANWR as a wilderness, scares them to death.”

The Republican-controlled Congress is not likely to make ANWR a wilderness, nor could it overcome a veto of a bill to open ANWR to development, which means Obama’s plans for the land are effectively the law of Alaska’s land until another Congress and president decide otherwise.