Home / About Stop The Overreach 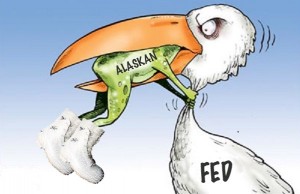 Webster’s dictionary defines OVERREACH as: to try to do something that is beyond your ability to do.

When it comes to Alaska, there might as well be a photo of Barack Obama and Sally Jewell included within that section of the dictionary. Alaska is under attack by a runaway federal overreach train and Obama and his hard core environmental supporters are at the controls.

In late January, President Barack Obama said  that he planned to ask Congress to declare much of the Arctic National Wildlife Refuge as wilderness, including its 1.5-million-acre coastal plain, an area on Alaska’s North Slope suspected to contain vast reserves of oil and gas.

Since 1980, when the Arctic refuge was expanded from 9 million acres to 19 million acres by the Alaska National Interest Lands Conservation Act, there’s been a stalemate over the coastal plain. The 1980 law left the plain in limbo, with congressional action required to open it to development or seal it permanently.

Alaskans are under a fierce attack on our sovereignty and our ability to develop a strong economy that allows us, our children and our grandchildren to thrive.. It’s clear that Obama and Sally Jewell do not care about us, and see us as nothing but a territory. The promises made to us at statehood, and since then, mean absolutely nothing to them.

The time has officially come for that fight.